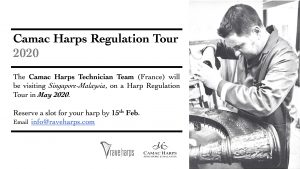 Singapore HarpFest VI is back, better and more exciting than ever before.

Concerts, workshops, competitions, both solo and chamber performances, an exhibition and more! Make sure you don’t miss out on 4 days of Harping FUN and excitement.

Find out more at www.singaporeharpfest.com

Join the young harpists on a dreamy adventure as they let their imaginations run free in dreamland, have fun together travelling to their favourite countries, and explore cultures and music on the harp!

Camac Harps Singapore and Rave Harps are holding a special three days with Isabelle Moretti at the end of October. On October 27th, there will be an open masterclass with the great French artist – places are limited, so register now at [email protected]. 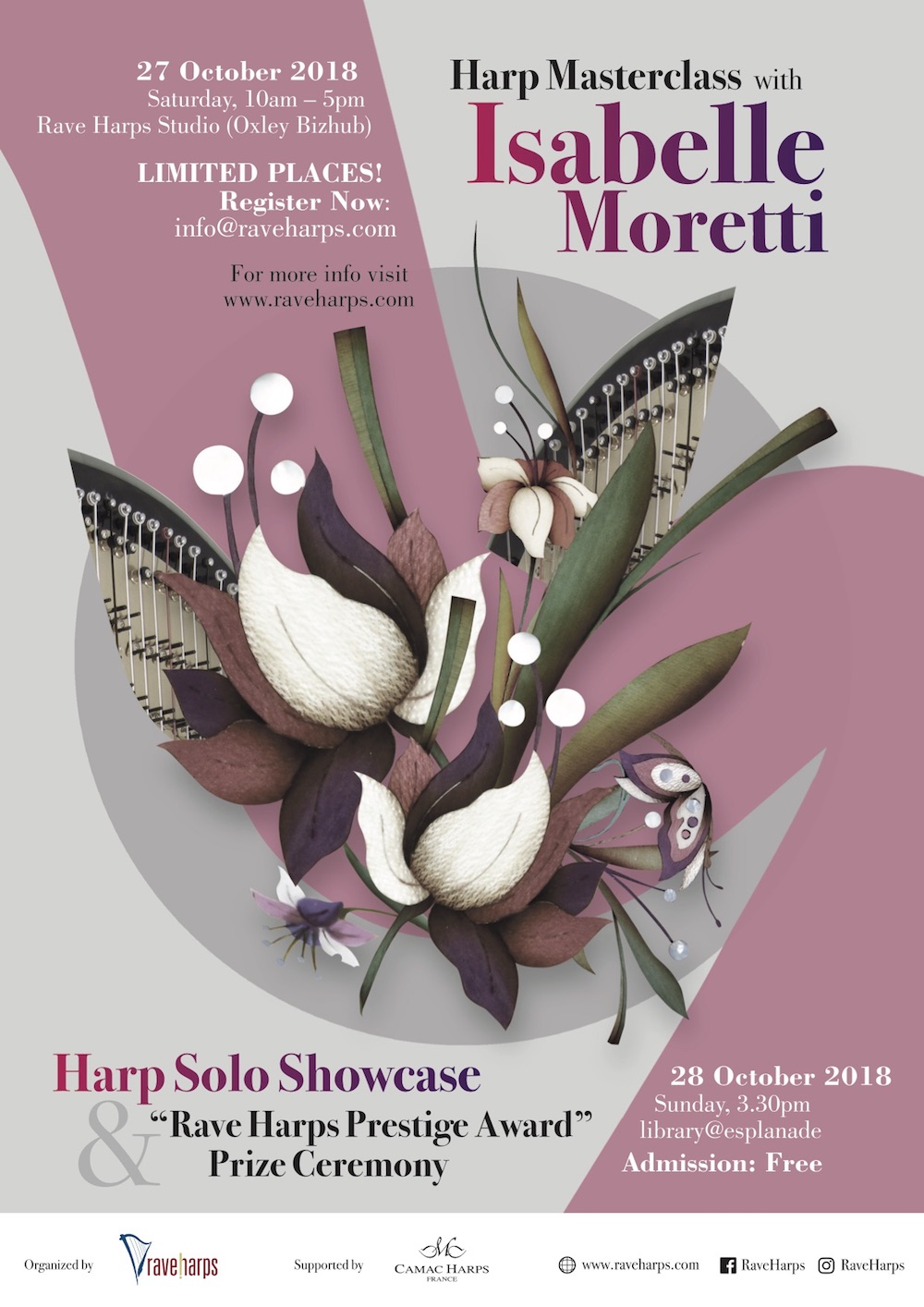 On October 28th, there will be a solo showcase, followed by the award ceremony for the Rave Harps Prestige Awards (the competition for members of the Rave Harps Academy).  The ten student winners will share the stage with Isabelle Moretti, in concert on October 29th!

To download the press release about the Canopée, and her sister the Art Nouveau, click here (PDF, 128 KB). 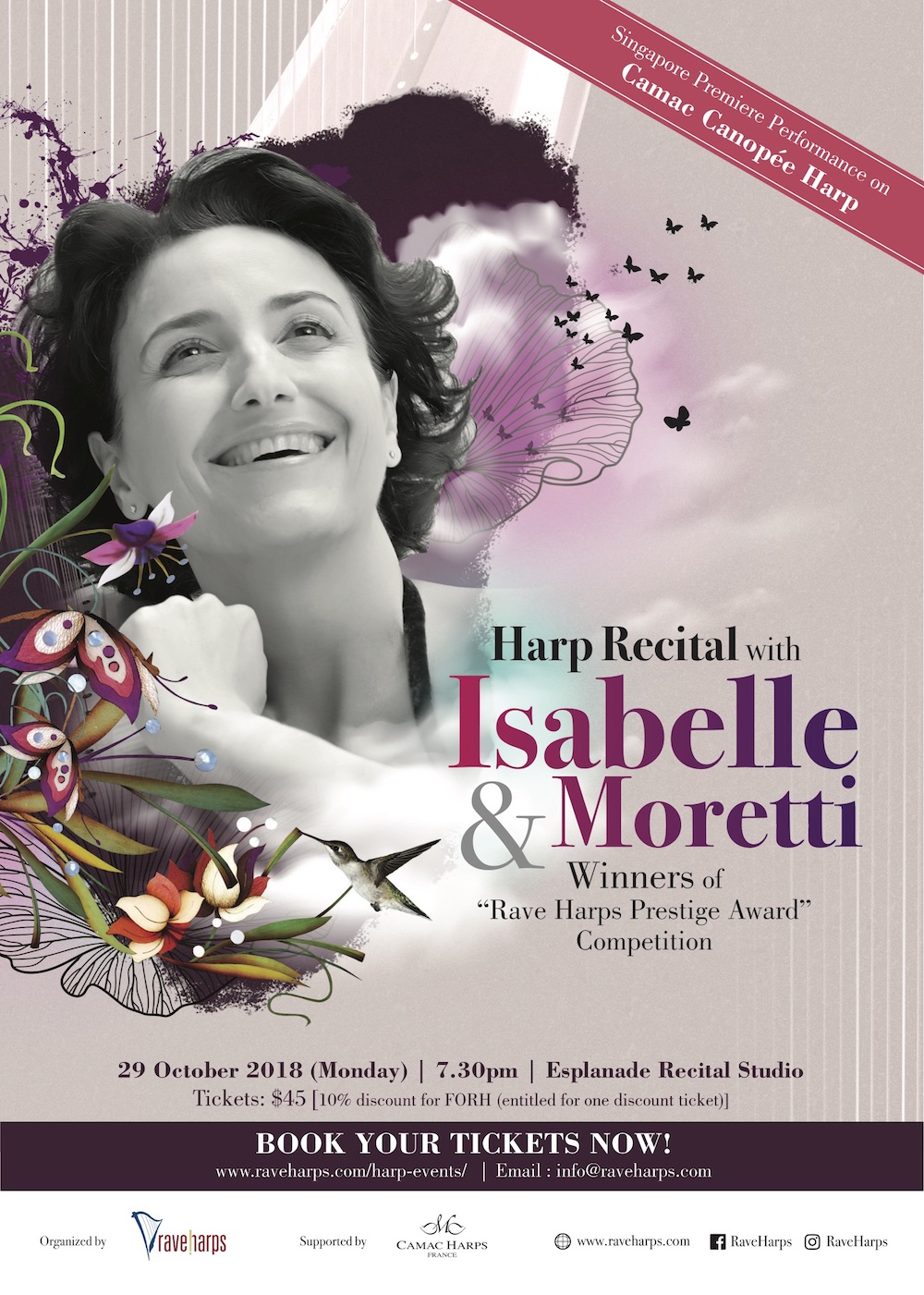 Katryna Tan and her colleagues have been developing the harp world in Singapore and Malaysia for over a decade. Both countries now boast  thriving teaching centre – Rave Harps – which run busy events programmes. Camac Harps are frequently proud to sponsor their projects. These include three previous editions of Pluck!, masterclasses with world-class artists like Isabelle Moretti, concerts featuring both international stars and home-grown young artists, and much more!

What a privilege it was, to host the talented and lovely Isabelle Moretti, here in Singapore. The evening premiered the Camac Canopée for the first time in Singapore, performed on by Isabelle Moretti. It was a sight to behold! A real visual and audio treat to all who were present that evening!

In conjunction with Children’s day, a few of the young harpists from Rave Harps put up a stunning show for the audience gathered at Esplanade Concourse, theatres on the bay. They took a journey through dreamland, with a repertoire of lullabies, and folk music from all around the world.

HARP OF THE ORIENT 3 is the biggest harp gathering yet in Penang, Malaysia. Led by artistic Director Katryna Tan, it was a spectacular harp event with everything from solo performances, to more than twenty harps performing together!

Pluck the fairy protector of music returns for another exciting  adventure. Something is amiss in the Harp Kingdom of Enchantia: people are forgetting how to make music, and Pluck must find out why.  Helped by her fairy friends – MEL, BEATBOX & HARMONIA – Pluck embarks on a journey through time to find the Magical Banyan Tree. Come help her rescue Music before it is completely forgotten.

Pluck! , the world’s only harp opera, shot to fame in 2012. Since then, it has gone from strength to strength and also boasts a sequel – Pluck and the Magical Banyan Tree. Rave Harps, the pedagogic and artistic organisation associated with Camac Singapore & Malaysia, then took Pluck on tour! There were two performances in Singapore on June 25th. In July, Pluck! then formed part of the grand finale of the 13th World Harp Congress in Hong Kong.

Leading up to the PLUCK Musical Performance (June 25, 2017), Artistic Director and Producer Katryna Tan visited the Woodlands and Jurong regional libraries, to talk about her life as a harpist in Singapore. Everyone enjoyed two fun afternoons getting to know the harp, and the director behind the first harp musical in the world!

Camac France President Jakez François made a rare concert appearance with Katryna Tan. They performed in Indonesia with Heidi Awuy and Iswara Giovani, with a mixture of classical and jazz. 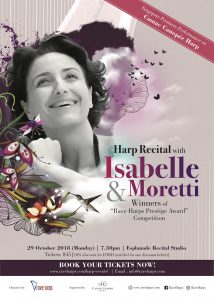 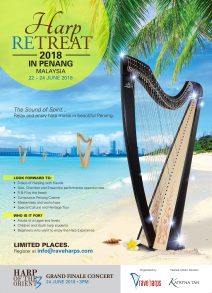 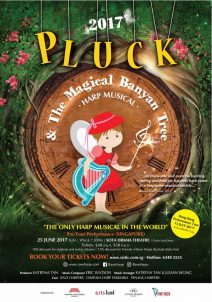 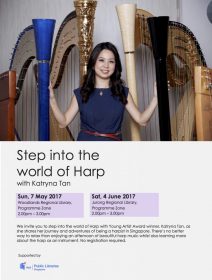 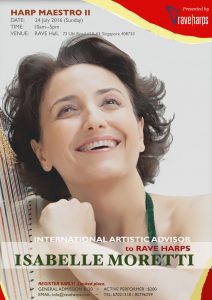 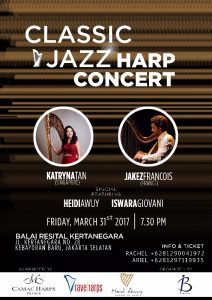